Updated the Car Related Events page, that is listed under Autolinks

Lots of events are in constant flux because of the Covid-19 pandemic so check your car show event sites/social media pages before you head out!

I did some editing to The Chevy/GMC Truck Parts Vendors list today.

American Classic Truck Parts, formerly of Aubrey, Texas has been bought by Classic Parts of America and moved to Kansas City, Missouri.

I try to keep the list updated with changes of the year range of parts each offers.. plus their contact information, websites, address, etc..

If you find any errors or know of some new suppliers, please let me know about them.

Added a page about axle specs. for 1965 Chevy trucks…

A fellow old Chevy truck pal online was asking about specifications on the rear axles for the 1965 Chevrolet trucks, so I scanned the info. into a file and placed it on the page in the 1960-1966 Chevrolet Trucks Information Section.

You can check it out here if you are interested in some dry technical specs. reading :

Added a book to the list on the Moonshine page.

I added to the list a book I recently read : Moonshine! by Matthew B. Rowley to my Moonshine page.

Check it out if that sort of thing interests you.

added a photo to the license plate bracket page

I added a photo from Bama Blue of c10trucks.com to the license plate bracket page.

The photo shows the measurement of the bolt from the edge of the bumper.

I edited out some dead links, updated a few URLs on my list of blogs, photo albums and websites people have made for their Chevy/GMC trucks :

I added a page of some photos I took at a car show… mostly trucks of course, but a few cars slipped in…

how many tools does it take…

… to add a tube to one wheelbarrow tire? 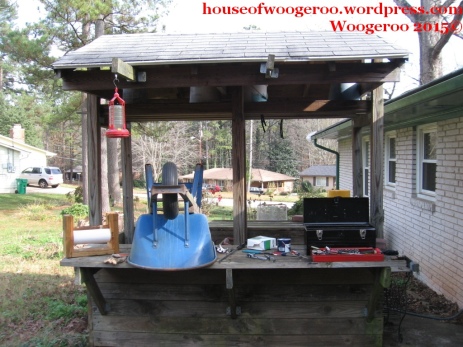 So many tools, only one project…

The old worn out tire on the wheelbarrow would not hold air anymore for more than a few days. It was at the point where it always popped the bead too, which made it a real pain to get any use out of. I was looking to swap the tire out, but had no joy finding anything but the complete tire/wheel assemblies. Then I saw the tubes which were less than a 1/3rd of the cost. No more than I use this thing, I went with that option. It was fun trying to get the tube into the tire, but I finally managed it. Then I pumped it up, greased up the axle good, then bolted/lined it all back up together.

Now I have a rolling wheelbarrow again.

I just thought it was amusing that I have all these tools scattered out everywhere for this one little project so I decided to snap a photo.

One film that I often get sucked into if I happen to find it playing on TV is the 1985 USA film Out of Africa which starred Meryl Streep and Robert Redford with direction by Sydney Pollack. It isn’t a perfect movie… but I like it for lots of different reasons. The stories, the characters, the landscapes… the way it is shot… the music really fits the film as well. I started watching bits and pieces of it on broadcast TV when I was a kid… but it was much later as a teenager that I finally saw the entire film from start to finish. It has been interesting how as I have gotten older, what appeals to me about the film changes or the things I pick up on and notice more.

As I got older I found out it was sorta based on some real people and I later found out about some of the sources for the film. Since I enjoy reading, I thought I’d find out more about the books themselves.

Here is what I found out about the books, enjoy.

If you look up the film on the IMDb.com site, you will find these writing credits listed :

The book “Out of Africa” and other writings was published in 1937 under the aforementioned pseudonym Isak Dinesen.

One interesting thing I read about her writings, as she was originally Danish and wrote in that her native tongue. She however, did not have her writings translated, at least not into English, she re-wrote them herself.

Shadows on the grass Hardcover – 1961
by Isak Dinesen (Author)

This book was written later and contains more tales of her time in Africa. Later on both titles, Out of Africa… and Shadows… were published in a single combined volume.

I myself read the combined volume and found the stories to be quite interesting. The books are said to be an interesting window into a time in what is now Kenya(was then known as British East Africa)… that is long since gone.

Isak Dinesen: The Life of a Storyteller
by Judith Thurman (Author)

This was a biography that was written about the life and work of Karen Blixen/Isak Dinesen.

Silence Will Speak: A Study of the Life of Denys Finch Hatton and His Relationship With Karen Blixen

This was a book about the character played by Robert Redford in the film; Denys Finch Hatton.

In life, the man was English… and from what I read they were going to have Redford play him that way in the film, as well as some scenes being shot with him using a English accent… but they seemed to think American audiences were too dumb to watch Redford being English or something, so they scrapped it and made him an American. Weird, yes?

If you’d like to read about the differences between the film and the materials/historical facts… view the wikipedia article about the film.

However, this is the book about the professional hunter, later pilot and conservationist the character is based upon.